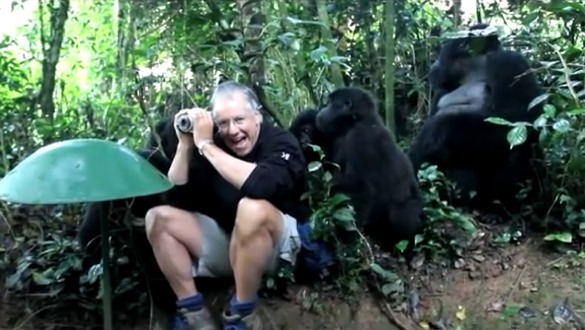 We were recently alerted to this stunning piece of footage, shot back in 2011 and showing one lucky photographer’s experience with gorillas.

John King had been staying at the Bwindi Forest National Park in Uganda, used as a base for tourists going on gorilla safaris.

Unusually, a family of gorillas walked directly through the camp and at this point, John and his party stuck with recommended protocol by crouching down and avoiding eye contact.

The gorillas seem un-phased, before changing course and heading straight to where John was squatting. Before he knew it, the infant gorillas started grooming his hair and understandably John said his heart was racing.

While his colleague Jonathan Rossouw continued to film the experience, John goes on to say ‘I just feel like one of the gang’.

The large male silverback of the group then joined the infants and squatted just feet behind John.

Although gorillas are generally gentle animas they can be hugely protective of their young, but it’s clear in this case that John wasn’t seen as a threat.

Bwindi Impenetral Forest is one of the best places in the world to see Mountain Gorillas in their natural habitat, with treks available all year round from multiple operators. However, due to the wet seasons each year the best time to visit is from June to September or from December through to February.

Expect to pay upwards of £600 per person as these are very exclusive treks with around 70 people visiting the gorillas each day and with no more than 8 people allowed to visit a gorilla family at a time.

As around half of the world’s remaining Mountain Gorillas can be found in Bwindi and the Mgahiga Gorilla Park in Uganda, you’re in with a pretty good chance of seeing them.

On it’s own it’s a once in a lifetime experience, but you may be as lucky as John King and get the chance to be up close and personal with these magnificent animals!