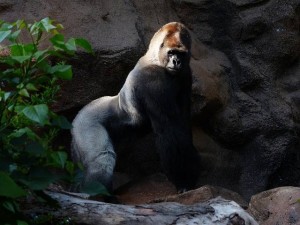 Resilient, dominant, and immensely loyal, mountain gorillas are one of nature’s most formidable primates, but sadly, their numbers have seen dramatic decreases owing to poaching and the decline of their natural environment through human intervention.

Although their numbers are believed to be on the up, mountain gorillas are considered a critically endangered species with only around 700 – 800 remaining on Earth. Owing to their size – up to an impressive 6ft tall when standing – mountain gorillas are frequently mistaken as a threat, but in reality, these majestic omnivores are peaceful and passive in their natural environment, although a silver-backed male often acts as the leader of the group, defending his troop against any potential harm.

“Mountain gorillas’ behaviour is similar to that of humans; they can often be seen playing, laughing, and hugging their family members to show affection.”

Almost half of all mountain gorillas can be found in central Africa’s Virunga Mountains, where they live on the green slopes of this volcanic land.

As a species who are best adapted for high altitude environments of 2500 – 4000m, many mountain gorillas are found in montane and bamboo forests, with sightings recorded in Rwanda, Uganda, and the Democratic Republic of Congo.

Unlike gorillas found in locations of a lower altitude, mountain gorillas have adapted over time to become better suited to these harsh environments. They have a long, thick coat of hair that keeps them warm in cold temperatures, as well as shorter arms and noticeably longer teeth. Usually they are much larger in size than their low-living relatives.

Central Africa has been an area of extreme human violence for decades, and this has had an unfortunate impact on the natural inhabitants of this remote and often desolate land. Deforestation, war, and poaching have all combined to turn the mountain gorilla’s home into anything but a safe haven. The Virunga National Park was the first settlement put together with the sole purpose of conserving mountain gorillas, and has been a fantastic step towards conserving this harmless species.

Over time, human settlements have moved closer and closer to natural gorilla habitats, forcing them into smaller living spaces and causing depletion in their home. It is important that mountain gorillas are given the space they need to repopulate and create larger families if we want them to be a surviving, thriving species.

Poaching has also been a problem and continues to pose a threat to mountain gorilla communities, with humans hunting them not just for meat, but also for their infants, and even to keep as trophies. Female gorillas give birth very infrequently – every 3 to 5 years on average – and so the loss of infants can be detrimental to the species’ population.

As more and more people hear about mountain gorillas’ struggle for survival, tourist interest has increased and more people are seeking them out in their natural environment. Although awareness is essential in the conservation process, the animals are unfortunately exposed to a high level of disease from humans and this could have a negative impact on their numbers.

As humans, we have a responsibility to allow each species their own space to repopulate. Mountain gorillas are also faced with the threat of extinction through continued war and violence in their habitat, as well as high-profit organisations, such as oil and gas companies, seeking to make money from the land they call home.

Virunga National Park has received a great deal of interest from European countries with both oil and gas concessions being allowed; although gorilla habitat doesn’t currently fall within the area granted for oil exploration, future changes in the gorillas’ environment could see potentially detrimental alterations to their current living and breeding situations.

Mountain gorillas are beautiful, peaceful creatures, and their sad decline over the last century has been solely the fault of human intervention. It is important to understand that these animals are perfectly happy to co-exist alongside the Earth’s other inhabitants and have given humans no reason to enforce extinction upon them.

All animals rely on the help of humans to stop unnatural forces, such as war and hunting, from creating a problem amongst their population, and we have the privilege of being able to make a positive change in their name