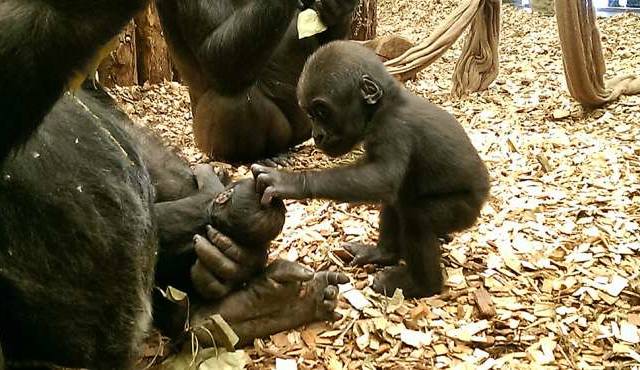 On 25th November 2015, ZSL London Zoo welcomed the latest addition to their Western lowland gorilla family. Baby Gernot was born following an eight and a half month gestation period for his mother Effie.

While the troop have been getting used to the new arrival over the last two weeks, Gernot’s one-year old half-sister Alika has been seen showering him with affection.

“Baby gorilla Gernot has quickly become the centre of attention at ZSL London Zoo’s Gorilla Kingdom, but one-year-old Alika has embraced her new role of the doting big sister.”

You can see both infants now at Gorilla Kingdom in ZSL London Zoo, along with the rest of the troop which is led by their silverback father, Kumbuka. He arrived at the zoo from Paignton Zoo (Devon) back in 2013 and it wasn’t long before he fathered his first child with Mjuku.

The zoo is also home to Zaire, who came from Jersey Zoo in 1984 and is the oldest female of the group as well as the most mischievous.

Part of ZSL’s work has been to work with local people in the region to develop tourism which has a minimal impact on the environment. Alongside this work the project monitors the health of the wild gorillas as well as that of people who come into contact with the gorillas, in an attempt to minimise any risks of transmission of disease. As we’ve discussed previously on Gorillas.co.uk, Ebola is one of the biggest threats to the survival of Western lowland gorillas.

Another project within the Conservation Programme is working with authorities in Virunga National Park to support their wildlife conservation work with both mountain gorillas and eastern lowland gorillas.