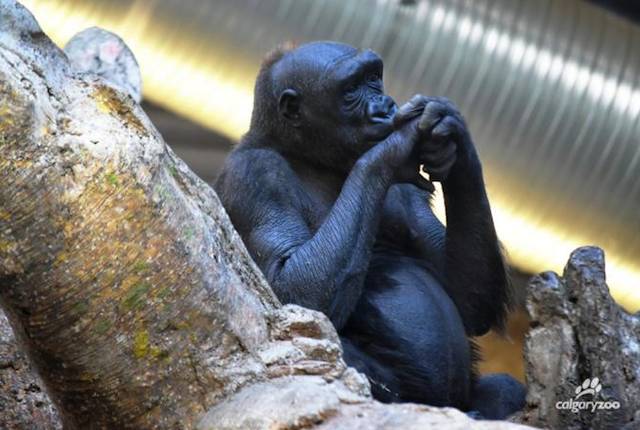 Last Monday saw an announcement from Calgary Zoo that 14 year-old gorilla, Kioja, is expecting her first baby in March 2016. As it’s her first, the gorilla team at the zoo have been helping to prepare her for the birth.

It may be a first for mum but 37 year-old dad Kakinga has already fathered nine other offspring at the zoo.

Kakinga’s story dates back to 1993 when he became the gorilla troop leader. Kioja only arrived at the zoo six years ago, originally coming from the Bronx Zoo with Dossi, her half sister (who is also 14 years-old now).

Curator at the zoo, Dr Malu Celli, expressed his delight with the news and re-iterated just how important these births are:

“In the wild, gorillas are critically endangered and by adding another member to our troop we are continuing to ensure there is genetic diversity within captive populations and safeguard the long-term future of this species.”

It’s the first gorilla birth at the zoo for over 7 years, when Yewande was born into the gorilla group in 2008. Alongside Yewande, Kakinga, Kioja and Dossi, Calgary Zoo is home to 18 year-old female Zuri.

Like other zoos, Calgary Zoo is part of the Species Survival Plan, which helps to ensure genetic diversity in captive populations, as well as safeguarding critically endangered species from becoming extinct.

The zoo also provides further support by working with the Eco-Cell programme preserve gorilla habitat through mobile phone recycling. This is due to a key element found in mobile phones called ‘coltan’ being mined in areas populated by gorillas. By recycling phones, the hope is that mining of coltan is reduced.