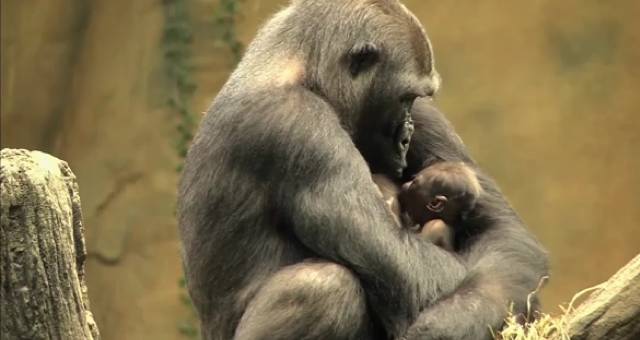 Wednesday 23rd September 2015 saw the announcement of yet another gorilla birth in captivity, adding to a great tally so far this year.

This time it was the turn of Brookfield Zoo in Chicago to announce the arrival of baby Zachary. Weighing in at just 5 pounds, the baby Western lowland gorilla adds a fourth generation to the zoo’s growing family. With most adult male gorillas growing up to 400 pounds in weight, he’s certainly set for a quick growth spurt.

As well as being home to Zachary’s mother, 11 year old Kamba, and father Jojo, the zoo also houses other family members amongst it’s gorilla population including his grandmother (Binti Jua) and aunty (Nora).

This is not the first time that the gorilla family has been in the media spotlight, with Binti Jua gaining fame after rescuing a three year old boy who fell into the enclosure back in 1996.

In the incident, Binti protected the child from the other gorillas until zoo personal were able to get into the enclosure – at which point she passed him over.

It’s believed Binti behaved in this way due to being hand-raised by humans, as opposed to gorillas in the wild.

“Having Jojo come here has been a great success story and demonstrates the collaboration among the zoo community to effectively care for this critically endangered species.”

Jojo was moved to the zoo in 2012 from Lincoln Park Zoo as part of a breeding programme, which so far appears to be of great success.