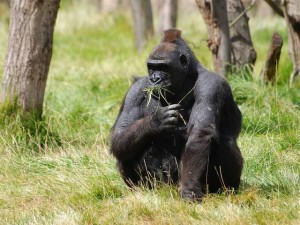 Lowland gorillas are the most common subspecies of gorilla, but they are still classified as “critically endangered”. There are two types of lowland gorilla – the western lowland and the eastern lowland.

When standing on two feet, the average western lowland gorilla stands at between four and a half and five feet tall, although some alpha males are much larger. They can weigh anything up to 600 pounds, although the average gorilla will generally weigh in at around 300 pounds.

Both subspecies have black hair covering most of their bodies. As they get older, males will develop a few grey hairs on their back, winning them the nickname “silverbacks” and elevating their position of authority in their troop.

Like all gorillas, they do best in the wild when left undisturbed, and they tend to inhabit densely forested areas. As a result, it is difficult to estimate the exact number still in existence.

As their name would suggest, western lowland gorillas can be found living in the lowlands of Cameroon, the Central African Republic, Gabon, the Democratic Republic of Congo, Equatorial Guinea and the Republic of Congo.

Eastern lowland gorillas can be found anywhere between the more mountainous regions and the swampy lowlands of the Democratic Republic of Congo, particularly in the Usala forest, the Itombwe Massif and in the Kahuzi-Biega and Maiko National Parks.

Lowland gorillas prefer densely wooded areas where there is ample vegetation to provide food and shelter. Their natural diet includes a range of local plants, stems, fruits, seeds, herbs and leaves, as well as tree sap and bark. On occasion, they have been known to eat small insects such as ants as well.

The average habitat of a lowland gorilla can be anything from one square mile to sixteen square miles, or more. Although they can climb trees, they prefer to live and sleep on the ground.

The number one threat to lowland gorillas is humans. Human activities such as mining, oil drilling, logging, urbanisation and traffic have wreaked havoc on the environment of lowland gorillas, who rely on the natural cover of the African rainforests to keep them out of harm’s way. As more and more forests are torn down to make way for new roads and construction, the gorillas’ natural habitat is shrinking, forcing them to adapt, move, resettle or perish.

Ongoing warfare in the Congo Basin has also had an irrefutable impact on the local gorilla population, as important protected areas such as the Virunga National Park become just another battle ground for warring factions.

On top of this there is the ever-present risk of poaching. Silverback gorillas are seen as a prize catch for hunters, and they are worth a lot of money on the black market either dead or alive. Gorilla meat is also traded on the bushmeat markets, while impoverished refugees or war victims have been known to work together to hunt gorillas for food.

Lowland gorillas are peaceful, family-oriented animals with extremely close ties to human beings. Like us, they prefer to walk on two feet, they have fingernails and opposable thumbs, their gestation period lasts nine months, and mothers carry their offspring around on their backs until they are three or four years old.

They are loving, calm and beautiful animals who also happen to possess an incredible natural strength. They are probably the most intelligent non-human animal on earth with a huge capacity for emotional and academic learning.

Lowland gorillas have lived in isolation for thousands of years, and it is only through human action that they are being forced to fight for their survival.