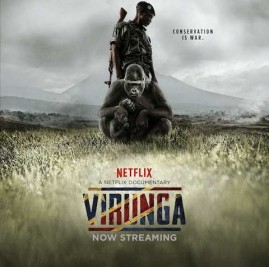 Academy Award Nominated British documentary Virunga has become an online hit since airing on Netflix. The film focuses on the conservation work of rangers in Virunga National Park in the densely forested Democratic Republic of Congo (DRC), and a UK firm’s oil exploration at the site.

The park is home to the last wild mountain gorillas in the world, and the film also highlights the area’s biodiversity and natural beauty, alongside the complex economic and political issues surrounding local armed conflict and oil exploration.

The picture was premiered at Tribeca Film Festival in April 2014, and narrowly missed out to CitizenFour in the 2015 Oscars in the Best Documentary Feature category, but has been massively popular and widely critically acclaimed. The documentary, directed by Orlando von Einsidel and executive produced by Leonardo Dicaprio, has also won a number of other awards.

It follows the remarkable true story of four key characters who are battling to protect the gorillas and the park against a number of threats, including armed conflict, poachers and oil exploration.

Filming started in 2012 when von Einsiedel travelled to Virunga to document the park authority’s positive progress in boosting development and tourism in the area. But days after his arrival, emerging armed conflict and the declaration of war from newly formed rebel group M23 meant the project’s focus very quickly shifted to cover the threatened stability of the park, and the gorillas the team had worked so hard to protect.

The director worked with Mélanie Gouby and park authorities to investigate British oil firm Soco International, which had been active in Virunga, a World Heritage Site. While secret filming apparently showed representatives from the company bribing park rangers, the firm has rigorously denied these allegations.

In June 2014, Soco International agreed in a joint statement with the World Wildlife Fund that it would not explore or drill in Virunga National Park unless the DRC government and UNSECO felt that would be compatible with the region’s World Heritage status.

However, the WWF says Soco hasn’t yet relinquished its operating permits, or agreed to an unconditional withdrawal from the park. This means the battle to save Virunga is far from over, and this film has great importance in highlighting the threats to mountain gorillas in the area.