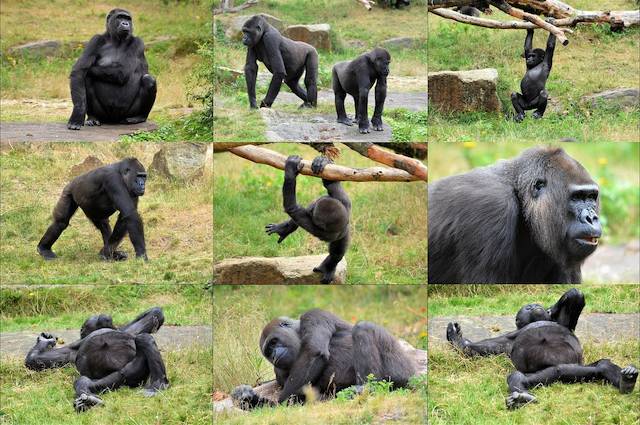 5 of the Best Places to See Gorillas in the UK

The UK has some fantastic wildlife parks where you can see gorillas interacting within their family groups. Here are five of the best to get you started.

Bristol Zoo is home to eight western lowland gorillas, with the most recent arrival born just 3 months ago in February 2016.

After months of work, Bristol Zoo opened Gorilla Island to the public in 2014 after the completion of the £1 million project. It’s now renowned for being one of the best gorilla enclosures in the country, complete with a 180 degree view of the gorilla house for viewers to enjoy.

You can also enjoy a gorilla talk and feed daily at 12.30pm to learn more about the family at the zoo, as well as conservation work Bristol Zoo is involved with worldwide.

The famous safari park is home to three male lowland gorillas and has been active in gorilla conservation since first housing gorillas after opening back in 1966.

Guests can view the colony across the lake from aboard the Jungle Cruise boats, where you can catch a glimpse of them enjoying their lakeside retreat.

For big fans there’s also a dedicated VIP gorilla experience, including unparalleled views from the VIP viewing platform and the chance to feed the three males.

The world’s oldest scientific zoo has brought the African rainforest to the center of London with it’s Gorilla Kingdom exhibit.

Featuring an island, indoor gym and large clearing, Gorilla Kingdom has seen the birth of two gorillas in the last two years online and is now home to a colony of six in total.

ZSL London Zoo is one of the many supporters of gorilla conservation work worldwide and is actively involved with field projects across Africa.

Durrell has established itself of one of the leading UK charities helping to prevent species from becoming extinct. The park was opened in Jersey by naturalist Gerald Durrell back in 1959 and has kept western lowland gorillas from the start.

Over this time its seen 15 gorilla births at the wildlife park and today houses five gorillas in total. Watch the gorillas play in the outdoor area, or catch a glimpse in one of the two internal rooms which are open to the public.

Strictly this is two places to see gorillas rather than one, but both are located in Kent and are extremely worthy of being on the list.

Port Lympne and Howletts are both operated by the Aspinall Foundation, which is recognized as one of the most successful breeders of gorillas in the country. Across both parks, over 130 baby gorillas have been born to date which is an absolutely astonishing accomplishment.

You can visit just one of the wildlife parks or both to meet the gorilla families, with Port Lympne providing additional safari tours around the park and just pipping Howletts to the post when it comes to impressiveness of the gorilla enclosure.