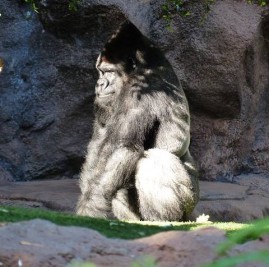 How Inbreeding is Good News for Mountain Gorillas

Latest research by the Wellcome Trust Sanger Institute has discovered that inbreeding within the mountain gorilla population has helped it to strengthen it’s numbers by overcoming genetic mutations.

The study looks at mountain gorillas living in the Virunga mountain range near Rwanda. The population has diminished to just over 250 in 1981 and researchers were keen to understand the effect on the gene pool.

Blood samples of seven mountain gorillas were collected over a number of years, allowing researchers to sequence the whole genomes. This was the first time such a feat had been accomplished and it now shines light on how mountain gorillas in the group have genetically been able to adapt for survival.

Previously it was thought that inbreeding in animal species was disadvantageous due to a decrease in genetic diversity. However, in this case the inbreeding appears to have been genetically beneficial for the mountain gorillas as fewer harmful loss-of-function variants were found compared to the larger Western Gorilla populations. This indicates that the inbreeding had helped to wipe out harmful variants from the gene pool.

The researchers also discovered that mountain gorillas have been surviving in small population sizes for thousands of years. This is one of the best pieces of news to come from the research as it gives hope that the current population sizes will continue to flourish and although the numbers have decreased, this isn’t a short term trend leading to complete extinction.

The mountain gorilla population is still severely low however and although gorillas can cope in small sizes, they won’t necessarily survive if humans continue to destroy their habitat. The World Wildlife Fund (WWF) predict that up to 90% of their habitat will be destroyed by 2030 if action isn’t taken now to protect.