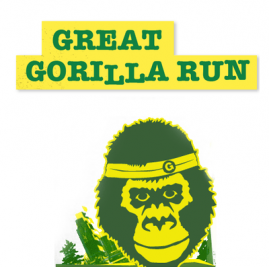 The Great Gorilla Run 2015 will be held on Saturday 9th September, it has been announced.

Started in 2003, the event will see hundreds of people dressed in gorilla customers taking on an 8km route in London. Participants can walk, jog or run the route and will pass some of London’s most iconic landmarks.

The Great Gorilla Run raised a massive £100,000 last year and in total over £2 million of charitable donations have been raised to support projects in Africa.

With under 900 mountain gorillas estimated to remain in the wild, the annual event is essential in providing funding for conversation projects aimed at increasing the population.

To get involved just head over to the Great Gorilla Run site to register for your place. Registration costs just £58 and includes a gorilla suit that you’re free to keep after the event. Their team will offer help to support your fundraising efforts and on the day you’ll receive a medal on completion, as well as knowing you’ve made a difference to support critically endangered mountain gorillas.