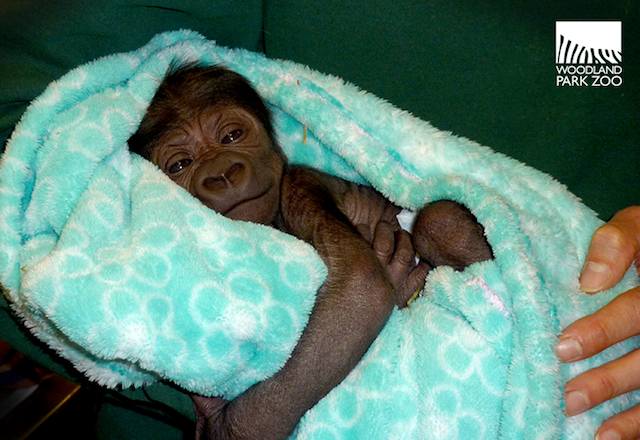 A female baby western lowland gorilla born on November 20th is said to be ‘thriving under the care of keepers and veterinary staff’ after first time mum Nadiri left the infant after giving birth.

19-year old Nadiri gave birth without any intervention from staff, but staff wecame concerned for the welfare of her baby so took the decision to intervene.

Since then, attempts have been made to introduce Nadiri to her baby and although her actions have been positive, she hasn’t shown any interest beyong this.

The staff at Woodland Park Zoo remain optimistic as Nadiri was partially hand-raised and therefore prior to birth had no experience of motherhood. Staff had also tried to prepare Nadiri during her pregnancy, training her to pick up a burlap baby to then present to the zoo cases in case supplemental feedings were eventually needed for the baby.

Martin Ramirez, the Zoo’s mammal curator gave an in insight into just how well the baby gorilla is now doing, stating:

“The good news is that the baby is flourishing. We’ve been very pleased with the baby’s first 72 hours, a critical period for newborn gorillas. She’s feeding sufficiently and maintaining her body temperature. Our focus over the next several days is to ensure this baby remains healthy and to keep moving forward with attempts to reunite Nadiri with her baby.”

It’s an important birth at the zoo as Nadiri’s father, Congo, was born in the wild. Because of this he had no other representatives in the population of zoo gorillas and so the birth of his granddaughter has introduced a new gene pool.

Nadiri herself was born at the zoo to mother Jumoke (now 30 years of age), who also didn’t show any immediate interest in accepting her new baby. Congo then died just a couple of weeks after the birth which meant the gorilla group was no longer able to provide a stable environment for Nadiri as there was no dominant male.

She was essentially orphaned, requiring 24/7 care from the gorilla zookeeper staff, before being introduced to a surrogate family of gorillas at the zoo.

Conservation efforts western lowland gorillas are supported by the zoo through the Mbeli Bai Study. This includes the research of behavior and social organization of over 450 lowland gorillas within the Republic of Congo. Based on the research, scientists are then able to assess the threat to population from habitat changes and how well the population will be able to recover from decline. It’s vital work in the global challenge of protecting these critically endangered animals from the daily threats they face.