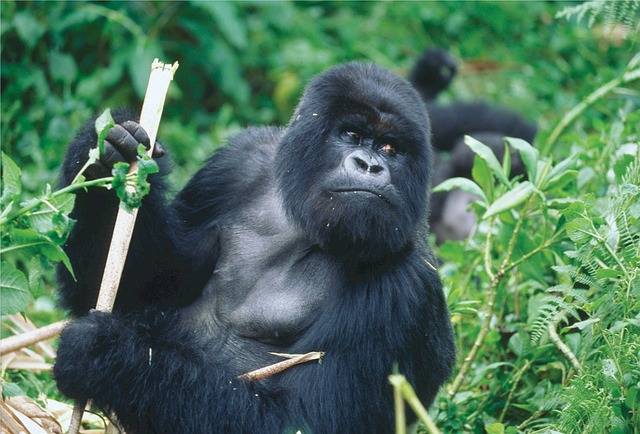 For the first time ever, young gorillas have been witnessed dismantling traps set by poachers. Reported first by National Geographic, the incident happened just days after two gorillas had tragically been snared by a poacher.

Unfortunately snares are a common sight in the Volcanoes National Park (Rwanda) where the mountain gorillas were seen destroying the traps in their forest home. They’re widely set by bush-meat hunters to snare antelope, but the unintended consequence is that gorillas often get caught in them.

Although adult gorillas are usually strong enough to free themselves, the younger ones aren’t as lucky and can end up dislocating bones just trying to get out.

The snares are set by tying a rope noose to a branch, which is then pulled on to bend the brand downward. A rock is used to then hold the noose on the ground and camouflage is added. Any animal unfortunate enough to get caught in the noose and nudge the rock (holding the noose down) is quickly snared as the branch immediately springs back upwards, in turn tightening the noose on the animal.

Rangers patrol the park daily looking for snares in an effort to protect the endangered mountain gorillas, but inevitably based on the huge area some aren’t found.

Veronica Vecillio, gorilla programme coordinate at the Karisoke Research Center believes the young gorillas destroyed the snares because they knew exactly how dangerous they are. As silverbacks in the gorilla family have been caught previously, the younger family members would have witnessed it first hand and so understand what to look out for.

In this case, the young gorillas broke the branches that had been pulled down, in effect rendering the snares useless.

We’ve all read reports previously of chimpanzees using tools and it’s fantastic that someone has witness the ingenuity of mountain gorillas. This behavior may help to save more precious lives in Rwanda by the gorillas themselves, rather than third party intervention.